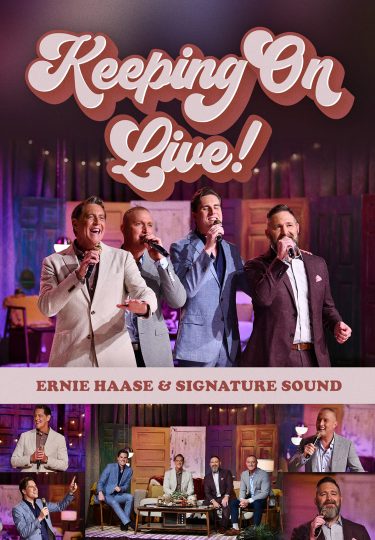 Ernie Haase & Signature Sound has led the way in finding opportunities to stay connected with their fans over these last couple of years. The efforts they have made consistently via video on most every Friday night have both sustained their ministry and have encouraged those longing for connections. The album Keeping On was born during a dark time when many needed encouragement to just put one foot in front of the other. After hearing about how the music from this album heartened so many, the logical next step for EHSS was to record another video.

Keeping On Live was recorded at Gaither Studios and features most every song from the album as well as a couple of familiar fan favorites. It wouldn’t be an EHSS concert without hearing “What A Savior”! The live band brings a fun element that Haase often features on his web-based TV series (Friday Night Sing and Good To Be Home) and fans have come to love these guys just as much as the four vocalists!