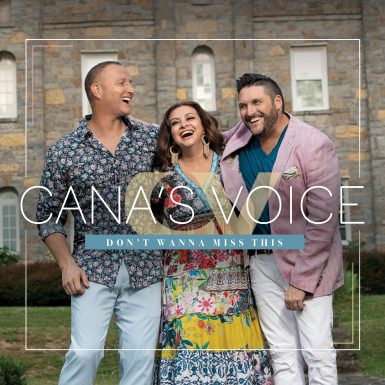 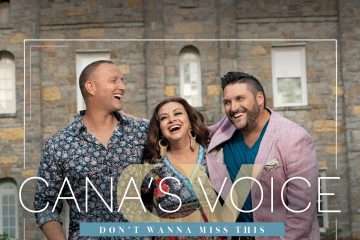 With countless live appearances behind them and the success of their chart-topping project, This Changes Everything, StowTown Records artist Cana’s Voice is thrilled about the release of their highly-anticipated sophomore recording project, Don’t Wanna Miss This, which is now available at all digital and retail platforms worldwide. Drawing on the strengths of three of today’s […]

These trio members found their group identity and name from the John 2 account of Jesus turning water into wine at a wedding feast in Cana. “What is so significant to the three of us is the vessels Jesus used to create that miracle,” Greene explains. “They were broken and old, had fulfilled their purpose and had seen better days, but Jesus used them for a purpose that was even better than the first. As we sang our first note together, we realized God isn't finished with us. Just like those broken vessels, we have been repurposed for such a time as this.

Many times in musical history, singers have decided to form a group and keep the news quiet while they rehearse and make crucial decisions concerning song selections, record companies, etc. Invariably, however, word gets out in the music industry. For several months now, that is exactly what has been happening, and the exciting news is being discussed by singers and musicians all around the country. It is now public knowledge that iconic gospel singers, Jody McBrayer, TaRanda Greene and Doug Anderson have officially united their talents to form the incredible vocal group, Cana’s Voice.

Due to her awe-inspiring ability to deliver a song, TaRanda Greene has also received many prestigious awards. Her powerful voice and testimony have landed her as a regular featured vocalist on Grammy award-winning Brooklyn Tabernacle Choir projects. She has been invited to sing at the United Nations, as well as in the largest churches across the world. She has been a regular on the In Touch Network and Turning Point Ministries. TaRanda is respected and admired by singers and musicians as an example of vocal excellence.

As a founding member of Signature Sound, phenomenally talented Doug Anderson has traveled the globe, appearing in countless sold-out venues. Doug has garnered a Grammy nomination and 13 Dove Awards as both a soloist and as a member of Signature Sound. During his time with the group, they had three videos and one CD attain Gold status in Billboard sales.

With several live appearances behind them, Cana’s Voice is now set to release their first recording project, This Changes Everything. Working with award-winning producer Wayne Haun, they carefully selected 13 songs designed to offer hope to the hopeless. While they want to send their message of God’s love and redeeming grace to as many people as possible, they are particularly concerned for those who are on the edge of giving up on God, Christianity and the church.

Utilizing the skills of songwriters Haun, Joel Lindsey, Tommy Sims, CeCe Winans and many other great writers, the project is sure to encourage and inspire. Leading off with an upbeat tune by Sims and Winans, “Heavenly Father” is a prayer acknowledging complete dependence on God and an ongoing need to receive His help. A remake of the classic Truth ballad “Jesus Never Fails” appears early on the project. In another remake, Cana’s Voice incorporates the Gaither Vocal Band selection “There is a Mountain,” by Marcus Hummon and Robin Ann Boudreau, to remind listeners to cross life’s mountains with Jesus’ help.

Listeners are not left with the impression that they can simply be recipients of God’s love. In a song written by Rachel McCutcheon, Helga Kaefer, & Whitney Walker, the group uses the Luke 7 account of an outcast woman wiping Jesus’ feet with her hair to admonish listeners to “Love Anyway.”

For Cana’s Voice, this message of hope and perseverance comes from a very personal place. “There’s a lot more to a group than just the music. We all had similar stories,” Anderson shares.

A self-described “family man,” Anderson struggled with the amount of time he spent away from his wife and daughters while on the road pursuing his musical career. This, along with increasing requests for solo concerts, contributed to his decision to leave Signature Sound in 2015. Greene was thrust into the role of single mom and suffered from loneliness and clinical depression following the unexpected death of husband Tony Greene in 2010. McBrayer departed from Avalon and stepped into a nearly decade-long hiatus from the music industry after being diagnosed with degenerative heart disease. He had also been deeply affected by the deaths of his father and a close associate.

Little did each one know that lessons learned while walking with God through those valleys and coming out on the other side would one day lead to a new ministry. From the moment they met to discuss the possibility of forming a new group, the musicians realized God was doing something unique. “Within a couple of minutes, we knew we had something special,” Anderson recalled. “We knew there was a chemistry between the three of us. We all had come from some hard stories.”

These trio members found their group identity and name from the John 2 account of Jesus turning water into wine at a wedding feast in Cana. “What is so significant to the three of us is the vessels Jesus used to create that miracle,” Greene explains. “They were broken and old, had fulfilled their purpose and had seen better days, but Jesus used them for a purpose that was even better than the first. As we sang our first note together, we realized God isn’t finished with us. Just like those broken vessels, we have been repurposed for such a time as this. We want to carry the gospel to the world with humility, knowing where we’ve come from, knowing God is guiding our every step; believing in the Heavenly Father to be exactly who He is. We stand as a voice for the broken and wounded, redeemed by the blood of the Lamb for a higher calling. We are Cana’s Voice.” McBrayer adds, “Our prayer is that God would give us a platform to change the lives of many people by telling of His grace and mercy.”

As the trio uses the stage to minister from personal experience of persevering through life’s difficulties, Cana’s Voice strives to help audiences understand the importance of pressing on through hard times and believing that God has a greater plan. “It Changes Everything: that’s what Cana’s Voice is to the three of us,” McBrayer commented. Describing the music industry as a “huge megaphone” to change lives by telling of God’s grace, mercy, and redemption, McBrayer said of the trio, “Our goal is to change everything we can about people. I don’t have delusions of grandeur. I just want people to hear and be touched by the music.”