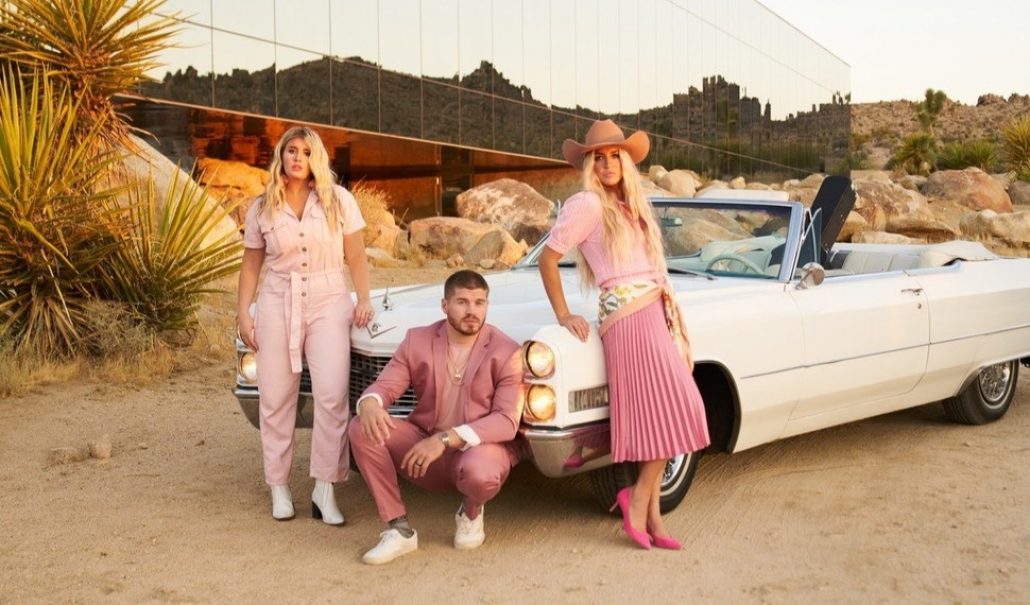 CAIN ANNOUNCES NEW ALBUM, RISE UP, OUT MAY 7

Trio Drops Latest Single And Music Video With "Yes He Can" - Available Now! Currently On The Road With Zach Williams' Drive-In Tour

5 April 2021 - Franklin, Tenn - CAIN, the sibling trio behind the multi-week No. 1 single "Rise Up (Lazarus)," announces the anticipated release of their first full-length album, Rise Up (Provident Label Group/Sony Music). Available May 7, the ten-song project is the follow-up to, and will feature songs from, their 2020 self-titled digital EP partnered with new tracks.

Leading up to the album's release, CAIN - comprised of Logan Cain, Madison Cain Johnson, and Taylor Cain Matz - just dropped their latest single "Yes He Can" accompanied by a music video, which can be viewed below. Featured on both the self-titled EP and upcoming album, "Yes He Can" shares the message of how God is always working miracles in our lives.

Logan explains, "In the song we share the lyrics 'Did He move every mountain? Did He part every sea? Yes He did, so yes He can.' We starting talking about how mountains come in all types of sizes, but God still cares about your mountain, no matter how big or small it is."

The video shares many touching stories, all which show support from Logan, Madison, and Taylor and backed by a decked out choir. From learning how to shoot a basket to being on a first date, CAIN even cast their dad in one of the video's stories to share his experience recovering from knee surgery.

"What we wanted to show in the video is how God uses the people around you to help make those miracles come to pass," adds Taylor. Madison concludes, "We hope that when the listener hears the song, they hear us cheering them on and that we're with them!"

CAIN will be sharing "Yes He Can," "Rise Up (Lazarus)" and more songs live while on tour this spring with Zach Williams' Rescue Story Drive-In Tour. Hitting 50 cities around the U.S., along with summer shows they will then again join Williams' rescheduled Rescue Story Tour this fall. Be sure to keep up to date on their touring schedule.

The music of CAIN quickly became a mainstay at radio since their debut single "Rise Up (Lazarus)" released in early 2020. They also released additional versions of the song: a duet with labelmate Zach Williams, a version with Colony House, as well as an acoustic version recorded with Essential Worship for its Song Session Series. They also dropped an acoustic cover of "Egypt," which was originally released by Bethel Music and Cory Asbury.
CAIN has also covered several other worship songs with Essential Worship, along with a stunning rendition of Williams' and Dolly Parton's duet "There Was Jesus." Additionally, last Christmas they released the top 10 hit "Celebrate Me Home," which became one of the highest charting singles at radio during the holiday season.

ABOUT CAIN: CAIN Is Madison Cain Johnson, Taylor Cain Matz, and Logan Cain. Residing in Nashville, there’s vocal harmony, and then there’s preacher’s-kids-growing-up-in-Alabama, sharing-one-room-all-their-lives, touring-as-a-family-band-harmony. The phrase-bending, chills-making, sibling harmony, and when you pair it with the soft rock sounds we’ve all been missing since the '70s, there you find the magic of CAIN, toeing the line between new and nostalgia. Choosing warm, analog tones from some of their influences, like The Eagles and Bob Seger, while not neglecting a crisp, current vocal, making something new altogether. The group has toured all across the US, UK, and Canada, performing at notable festivals like C2C in London and Cavendish Beach Music Fest, but they feel it’s all been preparation for where God is calling them: Christian music. Madison said, "Everything in our career to this point has been a matter of 'making it.' Every song, show, or video had the undertone of 'I hope this will be our big break.' It really took letting it all go and saying 'God, what do You want us to say?' Now, making music brings us pure joy, and I hope the audience can feel it in the songs."

Raised in Hartselle, Alabama as pastor's kids, CAIN got their first break opening for Dave Barnes and Andrew Ripp at a show in 2012. Less than a decade later with their debut single "Rise Up (Lazarus)" hitting No. 1 for multiple weeks, dropping an EP and soon a new LP, while touring around the country with labelmate Zach Williams, this is just the beginning for CAIN.  Be sure to visit CAINTheBand.com and follow their socials.