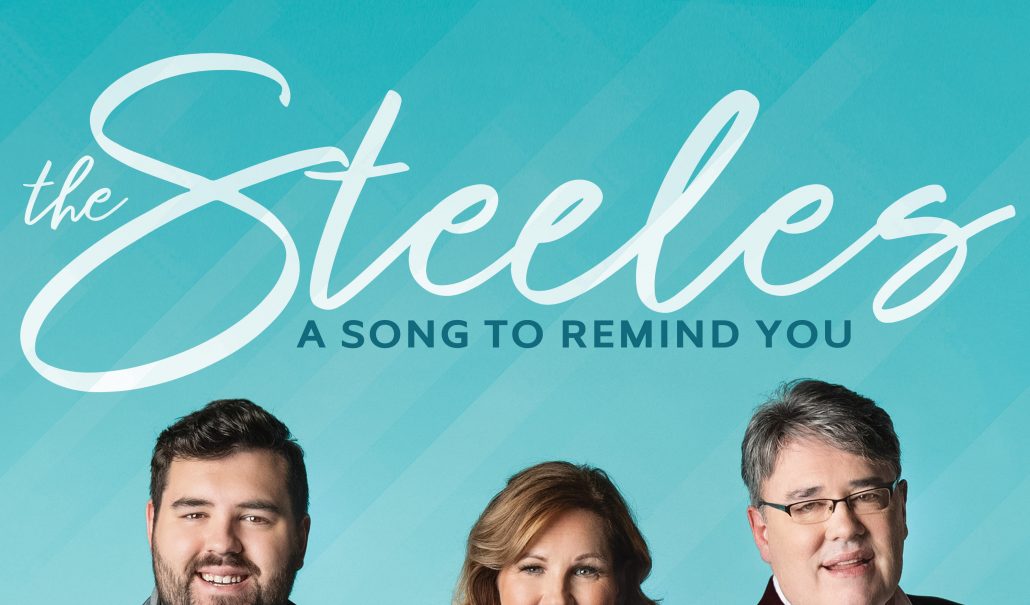 Multi-Talented Family Group, The Steeles, Release A Song to Remind You

(May 15, 2020) - StowTown Records has announced the release of a brand new recording from multi-talented family group, The Steeles. A Song To Remind You marks the trio’s first recording on the StowTown label. Jeff, his wife Sherry, and their son, Brad, team up with longtime friend and multi-award winning producer, Wayne Haun, to create a project that is sure to be celebrated by gospel music fans.

The Alabama-based family burst onto the scene nearly three decades ago, delighting audiences with their powerful musical collaborations. Over the years, they have enjoyed 18 number one hits, including such popular releases as “On The Road To Emmaus,” “God Kept His Promise,” “I Must Tell Somebody” and “Oh What A Mighty God.” In 1995 and 1996, Jeff Steele was named BMI’s Southern Gospel Songwriter of the Year.

A Song To Remind You promises to offer even more success for the gifted family. In fact, the debut single, ‘A Song to Remind You,’ has already reached the #13 spot on The Singing News Radio Chart, compiled by The Singing News Magazine. Prior to the national release of the recording, it sat at the #2 spot on Amazon’s Christian Music Chart. “We have never been happier for anything than this part of the journey that has led us to StowTown,” Jeff Steele says. “Wayne (Haun) has been a part of our family since 1995, and the absolute joy of having him produce us again is overwhelming.”

As excited as The Steeles are about the opportunity to work with Haun, the master producer is equally excited to be collaborating again with his longtime friends. “Working with The Steeles is like coming home for a family reunion or holiday. You pick up right where you left off,” Haun shares. “Brad is no longer a little boy. He has grown up to become a powerhouse performer and musical genius. I think The Steeles are in their finest moment. This record ministers in a very special and powerful way. Jeff and Brad are not afraid of honest questions and out-of-the-box musical ideas in their songwriting technique. It’s like listening to a wonderful musical Bible study.”

A Song To Remind You features selections that were either written or co-written by Jeff Steele or his son, Brad. “Brad has grown into a phenomenal writer and singer, and we are thrilled to have him on our front line now,” Steele shares. “This is truly a God-thing, and we are so excited. We believe, both lyrically and from a production standpoint, this is the best recording The Steeles have ever been a part of.”

For decades, The Steeles have been sharing the message of the Gospel, challenging and encouraging all who listen. This latest recording is sure to capture the attention of new listeners, and for those listeners who may have forgotten how truly talented The Steeles are, they offer a song to remind you.

A Song To Remind You is distributed by Provident/Sony and is available at retail outlets worldwide.

ABOUT THE STEELES:
During the 1990s, The Steeles were one of the staples of the gospel music industry, with numerous Top 10 and several number one songs. During this time, they teamed up with super-producer Wayne Haun for many of their projects. In 2004, The Steeles left the road and returned to pastoring a church in Alabama. In 2012, Jeff Steele wrote another hit song, “But God,” that was released to radio and considered an instant standard. Other hit songs followed, including the Singing News 2018 number one Song of the Year, “Prodigals.” Their most recent independent project produced three Top 10 singles. Jeff still pastors a growing non-denominational church in Cullman, AL. The Steeles consist of Sherry and Jeff Steele and their son Brad.