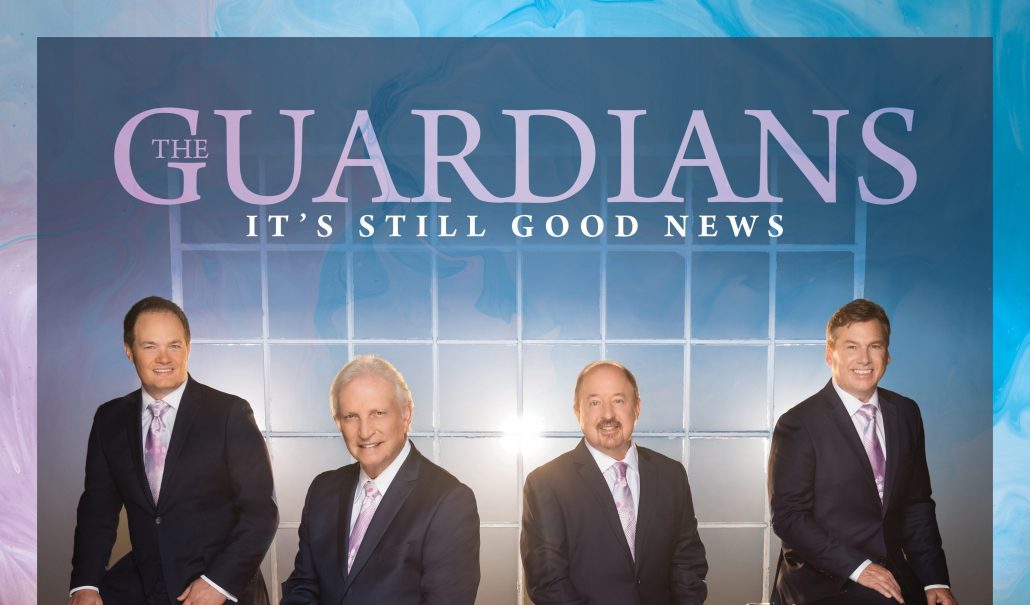 With two Dove Award nominations from the Gospel Music Association, as well as multiple Singing News Fan Award nominations, The Guardians have risen to the forefront of Southern Gospel Music. Dean Hickman, John Darin Rowsey, Pat Barker and Scott Mullins present tight four-part harmony and are committed to sharing the message of the Gospel through their music.

Formerly known as a trio, this latest recording effort marks the group’s second recording since adding bass singer Pat Barker in March of 2018. With this latest effort, The Guardians reach new heights with musical diversity and moving orchestrations, as well as lyrical content that shares the good news of God’s love, salvation and grace.

The commitment of sharing the Gospel message shines brightly through the songs included on It’s Still Good News. The recording features 12 cuts, including seven written by longtime group member John Darin Rowsey. “What an honor to have our own John Darin Rowsey write and arrange most of the songs on our new project,” group owner Dean Hickman states. “John’s talents, coupled with the unparalleled talents of producer Wayne Haun, resulted in another Guardians’ project that we believe God will use to minister to the hearts of Southern Gospel Music fans.”

Producer Wayne Haun shares, “I enjoy working with the Guardians for so many reasons. The musical brilliance of each individual obviously comes to mind, but honestly, I just love hanging out with these guys. It feels like a band of brothers coming together. It’s always a holiday of sorts. We talk about everything from music of the 1940s to complicated Bible trivia to who makes the best biscuits in the South. Working alongside John Darin Rowsey from start to finish is always a highlight of my year.”

From the classic “You're Home to Stay (Where We Ever Shall Be)” delivered with a modern flare, complete with electric guitar and lower brass lines, to the moving “From Now On,” a musical number featured in the 2017 film The Greatest Showman, as well as the worshipful “Holy Is Thy Name,” It’s Still Good News features The Guardians at their very best and offers hours of musical enjoyment for any traditional Southern Gospel Music lover.

It’s Still Good News is distributed by Provident/Sony and is available on all digital platforms worldwide, and wherever fine Christian music is sold.

ABOUT THE GUARDIANS:
The rich history of The Guardians is one that spans more than three decades. Led by long-time group member and tenor, Dean Hickman, the quartet includes lead vocalist John Darin Rowsey, bass singer Pat Barker and newest member, baritone Scott Mullins. Their combined love for the traditional stylings of Southern Gospel Music, as well as their desire to share the message of the Gospel in song with deep passion and excellence has made The Guardians a favorite among Southern Gospel Music lovers worldwide. They have enjoyed numerous Number One hits, as well as multiple industry and fan award nominations and delight audiences night after night with their four-part harmony and progressive musical styling.