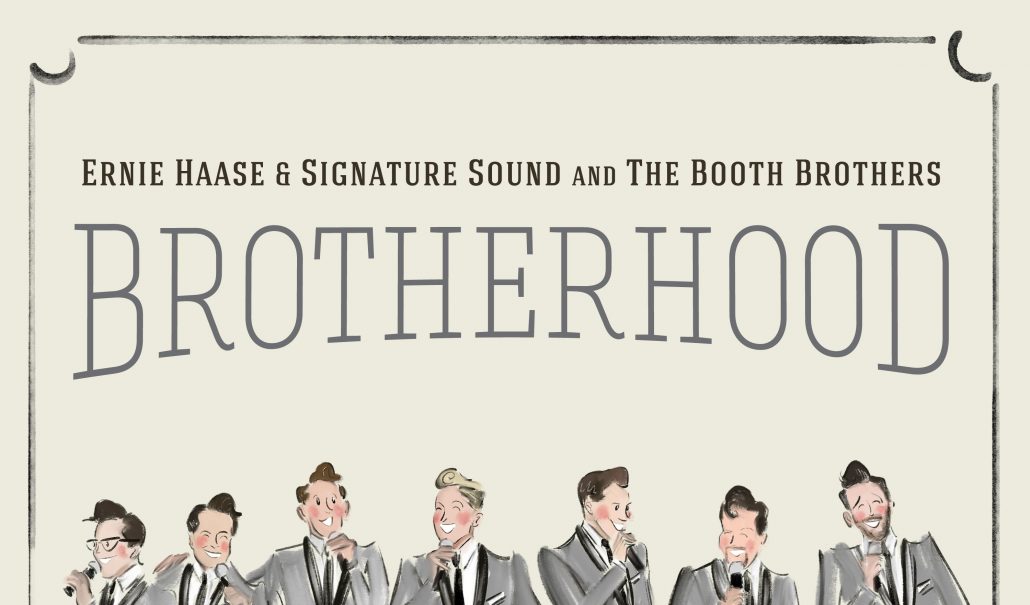 Nashville, TN (November 20, 2020) – Collectively, they have enjoyed more than 100 accolades, industry honors and fan awards. Over the past two decades they have received multiple Grammy® nominations and GMA Dove Awards, as well as countless Fan Awards from The Singing News Magazine. Since bursting onto the Gospel Music scene, Ernie Haase & Signature Sound and The Booth Brothers have each established their place firmly atop the genre’s ladder of success. Thus, in 2015 when the announcement was made by IMC Concerts that these two groups would be uniting for multiple concert events, excitement abounded from fans nationwide.

Obviously, the live concert events proved to be a tremendous success with sold-out crowds each night. From those live events comes a brand new release from StowTown Records. Brotherhood, by Ernie Haase & Signature Sound & The Booth Brothers, features two of the most acclaimed artists at their very best. This collection of camaraderie, laughter and timeless music allows fans the opportunity to own a collective piece of history that can be enjoyed day after day.

IMC Concerts & StowTown Records President Landon Beene shares, “When the idea of bringing these two artists together was first presented to us, we knew it would be something special. Their talents flowed together extremely well on stage and it was an electrifying event. We are thrilled to make it available as a live recording.”

The recording features timeless classics, delivered with the same infectious energy that has attributed to the overwhelming success these two groups have enjoyed over the years. From start to finish, this recording truly captures the bonds of brotherhood these talented individuals share.

Brotherhood is distributed by Provident/Sony and is available wherever fine Christian music is sold and all digital platforms worldwide.

Brotherhood Track Listing:
Life’s Railway to Heaven
Home
All the Gold in California
Jesus Is Coming Soon
I’ll Fly Away
Sweet Beulah Land
Going Home
In the Garden
Look for me at Jesus’ Feet

ABOUT ERNIE HAASE & SIGNATURE SOUND:
From its formation in 2003, Ernie Haase has built Signature Sound Quartet into one of the most popular and beloved quartets in all of gospel music. Haase’s early roots lie with the legendary Cathedral Quartet, and his time with them fueled the dream of starting his own powerhouse quartet. EHSS has traveled all over the world, offering energy, excitement and encouragement through its powerful brand of gospel music. As one of the most celebrated quartets in the genre, EHSS has earned a GRAMMY ® nomination and multiple GMA Dove Award wins throughout the years. Additionally, the group is a radio favorite in the United States, as well as internationally, and a leader in CD sales and long-form music video sales with several RIAA®-certified Gold® and Platinum® DVDs. Ernie Haase & Signature Sound is comprised of Ernie Haase (tenor), Devin McGlamery (lead), Dustin Doyle (baritone) and Paul Harkey (bass).