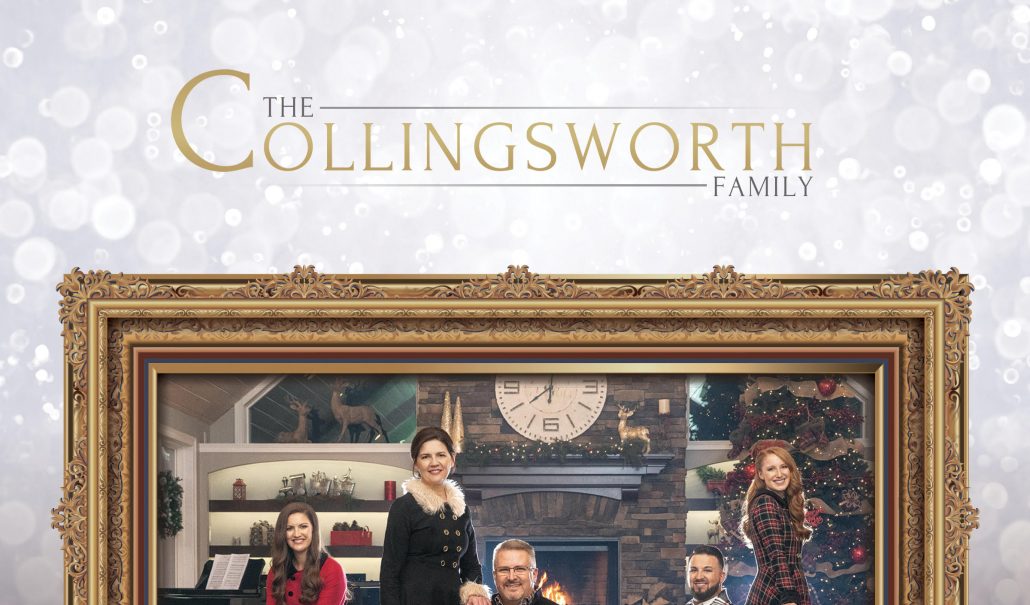 The Collingsworth Family Celebrate Christmas and a YouTube Milestone

Nashville, TN (November 12, 2021) - Christmas is a special time for family to gather and celebrate. If you are The Collingsworth Family, you start that celebration early and capture performances for fans and friends to share! For the 2021 Christmas season, they have released two projects with StowTown Records: A True Family Christmas, a DVD production of their highly acclaimed Christmas album, and Kim Collingsworth’s piano album Simply Christmas, which is available for the first time on digital platforms.

While these are early Christmas gifts for us, The Collingsworth Family received a gift of their own last week when they reached a monumental milestone: 100,000 subscribers on their YouTube channel! This is truly a testament to the endless effort they have put into creating and uploading video content for several years. Because a lot of the videos are live performance videos, one might assume that the concert experience at home is the driving factor of the channel growth. But comments in the videos show that the encouragement and blessings received from the songs themselves, as well as the passionate delivery from The Collingsworth Family, are what drive fans to their YouTube channel. Long-time producer and friend, Wayne Haun, shares, “When I first met The Collingsworth Family years ago, I knew they were something special. I knew they had a special talent and a special anointing placed upon them. Now I’m glad that thousands and thousands of others around the world are seeing it as well.”

Phil and Kim Collingsworth recognize the specific work and planning that went into this achievement. “Will Blair and Emily Raynes have worked tirelessly over the past two years, building, building, and building our YouTube channel through very high quality content and promotion. This was a major milestone for us, in the growth pattern the Lord has allowed us to enjoy over the past two years.”

One can hope that today’s release of A True Family Christmas DVD will eventually yield even more YouTube video content from The Collingsworth Family. During the summer of 2021, The Collingsworth Family created a Christmas wonderland before a capacity crowd at Liberty University in Lynchburg, VA. With cameras rolling, they masterfully presented the intricate arrangements of beloved Christmas carols and compelling jazz arrangements of new Christmas songs, all laced with the harmonies and blend for which The Collingsworth Family is known. Phil Collingsworth reflects, “This live concert setting of our Christmas Tour program embodies everything we put into the creation of A True Family Christmas album: a festive atmosphere, a full live orchestra and band, plus Christmas lights and trees – it’s just Christmas on steroids!” As always, the unapologetic message throughout was the true reason for the season: the birth of the Christ Child. Full orchestra and a live band complement the vocals and make this Christmas DVD one that families will pull out and include as part of their Christmas traditions year after year. You can purchase A True Family Christmas DVD, distributed by Provident/Sony Distribution, at retail music outlets worldwide.

In 2009, multi-award winning pianist Kim Collingsworth released the piano solo album Simply Christmas. Today, this fan-favorite seasonal project is available for the first time at all digital music outlets. “This unique, piano-only project was something I recorded to give folks gentle, simple Christmas melodies that could float throughout their homes during the season of celebration,” remarks Kim. “The arrangements were intentionally kept simple so that they could be used as background music for parties or just to set the mood for a beautiful Christmas candlelit dinner.” Simply Christmas is digitally distributed worldwide by Provident/Sony Distribution, and can be downloaded or streamed HERE.

In support of A True Family Christmas, The Collingsworth Family will be making tour stops throughout November & December in 20 different cities. Visit their website for a complete list of tour dates.

A True Family Christmas DVD Track Listing:
Christmas Spirit Medley
Carol of the Bells
Have Yourself a Merry Little Christmas
Carol Sing-Along
Let There Be Peace on Earth
I Call Him Lord
The Most Wonderful Time of the Year
I’ll Make Him a Home in My Heart
Christmas Like We Mean It
Sleigh Ride
I Heard the Bells on Christmas Day
The Story of the First Christmas
Let It Snow! Let It Snow! Let It Snow!
Home for Christmas Medley
Another Christmas Closer
Isn’t That Why He Came?
Silent Night
Mary, Did You Know?
Hallelujah Chorus
Joy to the World

Simply Christmas Track Listing:
Have Yourself a Merry Little Christmas
It’s Beginning to Look a Lot Like Christmas
Deck the Halls
What Child Is This?
O Come, All Ye Faithful
I Saw Three Ships
I Wonder As I Wander
Mary, Did You Know?
God Rest Ye Merry Gentlemen
Joy to the World
Carol of the Bells
I’ll Be Home For Christmas
White Christmas
Winter Wonderland
Let It Snow
The Christmas Waltz
The Christmas Song
Mary’s Boy Child
Away In A Manger
O Holy Night

###ABOUT THE COLLINGSWORTH FAMILY:
Family group and acclaimed musicians, The Collingsworth Family, are one of Gospel Music’s most beloved artists. As highly accomplished musicians, Phil & Kim Collingsworth, along with their children, Brooklyn (Blair), Courtney (Metz), Phillip and Olivia, have mesmerized audiences all over the world. In addition to singing, the family impresses with their instrumental power: Kim on the piano, Brooklyn and Courtney both on violin, and Phil, Sr. on the trumpet. The Collingsworth Family has been honored by both fans and industry peers alike. Awards and nominations have been bestowed upon them from the Gospel Music Association, the Singing News Fan Awards, and most recently, the Grammy committee. But accolades and awards are not what drive this family’s ministry. Phil & Kim’s entire purpose is to give the talent God has loaned them back to their Creator as a sacrifice of praise.