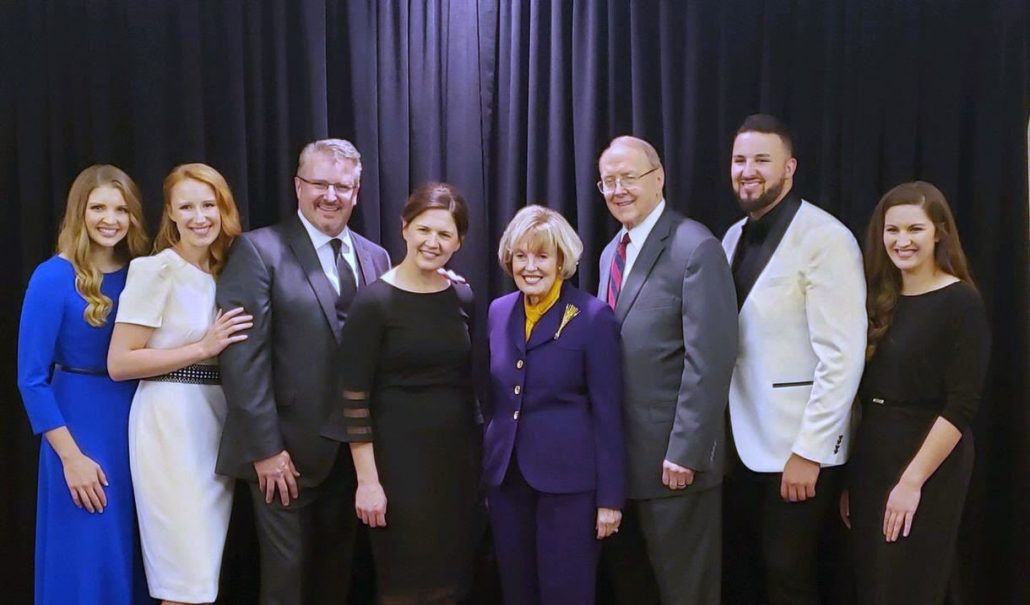 The Collingsworth Family Performs at National Day of Prayer Banquet in Washington, D.C.

Nashville, TN (May 3, 2019) - The Collingsworth Family had the distinct honor of performing at the Celebration Banquet for the 2019 National Day of Prayer events on April 30th in Washington, D.C. Their performance at the invitation-only banquet, held at the Ronald Reagan International Center, was attended by numerous guests, including many members of the U.S. Congress as well as other high ranking U.S. Government officials.

Phil Collingsworth, Sr. shares, "It was an honor to have been asked by the National Day of Prayer committee to perform for their opening ceremonies this year in Washington, D.C. Our family so enjoyed talking with Dr. James and Shirley Dobson, who have so long been associated with the NDOP (Shirley Dobson was the president for 25 years.) To see that group of politicians and associated government dignitaries call on our Creator and ask for His intervention was an experience of a lifetime for our family. And to enjoy a personal tour of the U.S. Capitol at midnight and to sit in the empty House Chamber and pray aloud for those who would be sitting in those seats the next day was a moment I will never, ever forget."

###
ABOUT THE COLLINGSWORTH FAMILY:
Family group and acclaimed musicians, The Collingsworth Family, are one of Gospel Musicâ€™s most beloved artists. As highly accomplished musicians, Phil & Kim Collingsworth, along with their children, Brooklyn (Blair), Courtney (Metz), Phillip and Olivia, have mesmerized audiences all over the world. In addition to singing, the family impresses with their instrumental power: Kim on the piano, Brooklyn and Courtney both on violin, and Phil, Sr. on the trumpet. The Collingsworth Family has been honored by both fans and industry peers alike. Awards and nominations have been bestowed upon them from the Gospel Music Association, the Singing News Fan Awards, and most recently, the Grammy committee. But accolades and awards are not what drive this familyâ€™s ministry. Phil & Kimâ€™s entire purpose is to give the talent God has loaned them back to their Creator as a sacrifice of praise