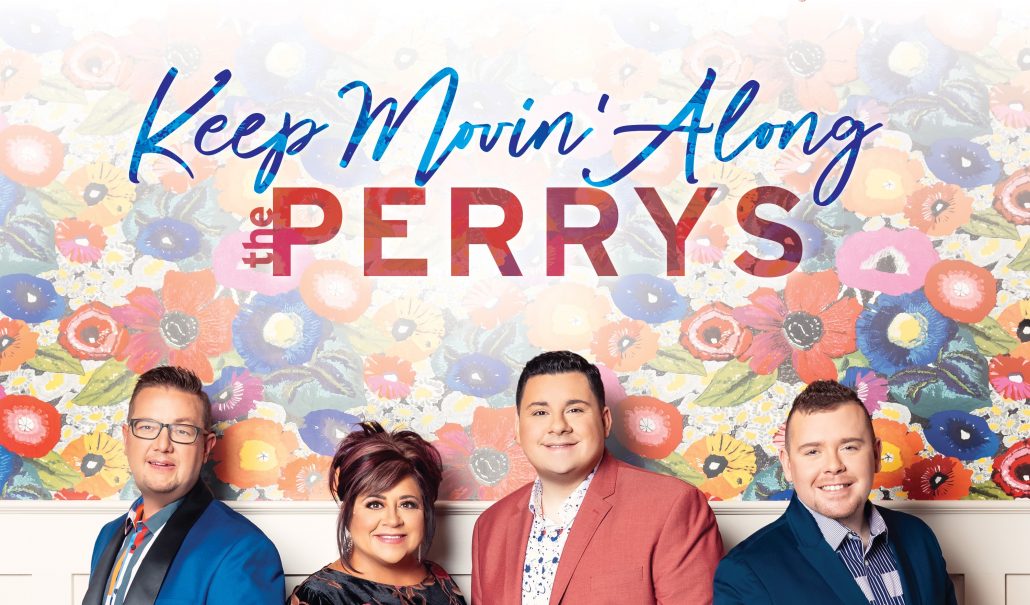 The Perrys Keep Movin’ Along With New Recording

After more than two years, fan favorite Southern Gospel artist The Perrys have released their brand new project, Keep Movin’ Along.  This StowTown Records release is available at all retail and digital outlets worldwide via Sony/Provident Distribution.

The Perrys, comprised of Libbi Perry Stuffle, Troy Peach, Andrew Goldman and Jared Stuffle, have always chosen their material carefully. They take their mission to share the Gospel quite seriously, that does not mean sugar coating life to make everything seem easy. The last several years were difficult for the group as they cared for one of their own while continuing to travel and minister. With the passing of beloved bass singer Tracy Stuffle, the last two years have taken them through a journey of grief and of hope, which gives them even more to sing about. “It’s been over two years since The Perrys have released an album with all new material,” Troy shares. “It’s amazing to look back at what all could transpire in two years. Keep Movin’ Along is filled with songs that tell where we are, where we’ve been and where we’re going! We are excited to share this new season of life that God has afforded us.”

Keep Movin’ Along was produced and arranged by StowTown Records co-owner Wayne Haun. As someone who has walked on the hilltops and through the valleys with The Perrys over the last twenty years, he knows them, their story and their heart better than most people. “Of all the projects I’ve produced for The Perrys, this has to be the most diverse. It is heartfelt, fun, emotional, and it is groovy. Not only that, but you get to hear Libbi soar all the way up to a high B-flat on the ballad (“Take You to the Cross”) – and she never once complained!”

The diversity Haun speaks of can be found in many aspects from song styles to songwriters to packaging. The Perrys are known to include a convention style song on each release, but this is the first time that song has been the title cut. Thirteen different songwriters contributed to the seven songs, including (former Perrys member) Joseph Habedank, Scotty Inman and Kenna Turner West. As the first recording following the death of Tracy, The Perrys knew that they wanted everything to convey the joy and hope they’ve chosen to embrace these last two years – and the bright colors of the cover photo were intentionally selected to show that visually.

Even with this variety, the message and theme is consistent: God is faithful, God is always there, God loves you, and God is the answer. As Libbi has shared with fans, no matter what you are going through, God is, and always has been, there. And that is the message they continue to share through their music ministry as they Keep Movin’ Along.

KEEP MOVIN’ ALONG TRACK LISTING:
It Never Gets Old
Walk Me Through
Take You to the Cross
That’s How You Know
Tailor Made
Never A Time
Keep Movin’ Along